A few weeks ago I saw this black 1985 Aria Pro II ZZ Bladerunner in my Reverb email feed. I already owned two Aria Pro II ZZ's: a red '85 Standard and a red '82 (I think) Deluxe that I've been rebuilding from a pile of parts for some time. I'll eventually blog about those. I've caught a bug though. I'm addicted to these things.

At the original price, I was looking but not buying this guitar. Then the seller dropped the price significantly twice over the course of the next couple of days. And he was nice enough to bargain back and forth with me for a bit more. Thank you! Because Reverb, and used gear in general, is a dealer market, I'm not disclosing the final sale price.

What really excited me about this guitar was the condition. I love playing the '85 Standard but it's pretty beat up. I've done enough work on the Deluxe that I know I'll love playing it when it's ready, but there are cracks going right through the body. I knew that getting into the project. You can't expect one of these, given their shape, to survive 30+ years without some dings and dents. Clumbsy pointed shape aside, I don't think they were the instrument anyone was thinking about being sought out during their prime time. So they were played rough. All the more reason to seek them out now!

This ZZ was in great shape from the photos. Great price, somewhat rare find, and in good condition. I was excited to unbox it! It arrived. I cut the tape. Started pulling out wads of paper. The seller did a great job packing it. All the corners had inches of cushioning. I didn't take a picture of the packing job, but really - it was good. Despite that, I pulled the guitar out to find it looked like someone got hungry. 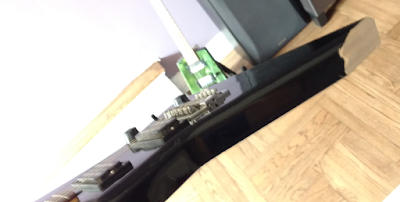 And there it was. Sitting in the box. 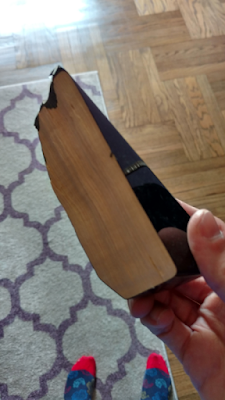 Again I'll stress here, UPS must have really put this thing through hell given the way it was packed. I was sad for a moment and then thought: I still got an excellent deal and this is totally fixable. And it was. I'd like to touch up the finish a bit one day when I have time, but it was a clean break and easy to glue.

I'm missing a bit more paint on the top edge of the body. 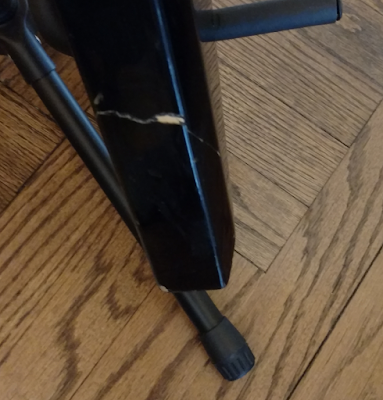 Getting it to look as good as new is going to be an exciting challenge for me. Despite how bad it looked upon unboxing, I'm just thankful it broke in an area that really doesn't do anything. What if it had been the neck pocket?!?

Information on Aria Pro II guitars is scarce but luckily this one is in the catalog collection at matsumoku.org. That's the '86 catalog. The serial number indicates it was produced in '85. Makes sense. Here's a summary.
Here's a deeper dive into this guitar.

At the time Aria was producing two types of hot rails pickups in both humbucking and single coil configurations. These are "type I". Type "II" have thinner rails. Both are ceramic pickups. The catalog lists type I as ferrite specifically. 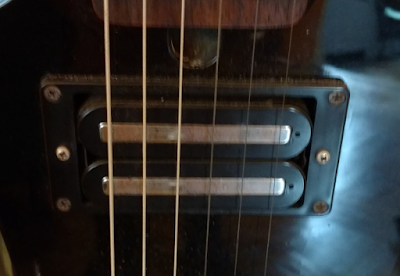 The catalog does not mention that like every Aria Pro II guitar I've owned with an HH pickup configuration, the tone is a push-pull pot and its switch function when toggled, is to split the humbuckers. 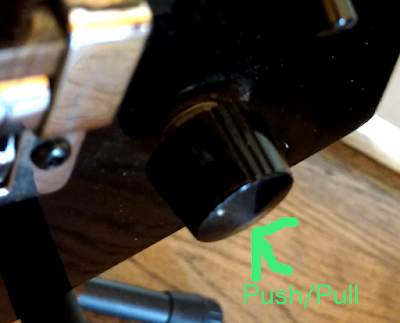 With other pickups the effect of coil tapping is rather pronounced. With these pickups the difference is a little less pronounced. However, the single coil hums don't have this problem! I haven't explored under the back electronics cavity yet but I assume there is little to no shielding. Until I get a chance to clean things up, I'm avoiding pulling out the tone pot.

As humbuckers though I love these. They're high output. I'm not great at writing about sounds so I'll post up a recording at some point. But I'll say that the neck has a ton of string clarity. The bridge is balanced. Lots of output but not over the top. Among pickups I own these are definitely in my top 5 favorites.

I'm missing one fine tuner and a trem bar. So I've got some eBay hunting to do. 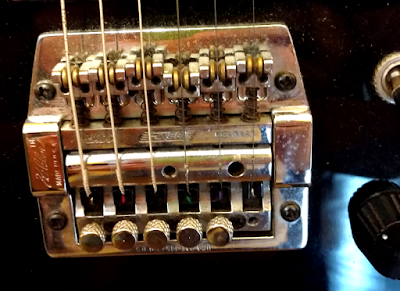 As a player, I am not into using the trem. But as a build and repair hobbyist, I find them to be fascinating pieces of engineering work. I was happy to find that the 2330 Flyer was a popular enough model that they still go for around $100 today when they're in good condition. They don't seem to suffer from the same type of wear as floyds. No knife edge problems. And there are plenty of parts floating around. Here are some useful resources I've come across reading up on it so far.
The nut is interesting. The lock nut is mounted on top of a shim mounted on the headstock behind a graphite nut. 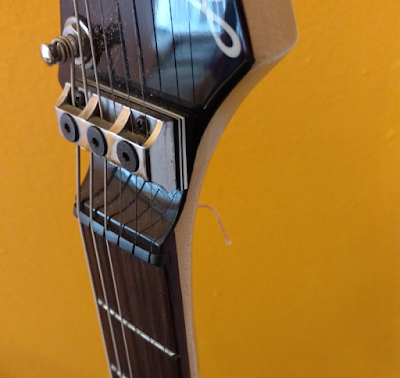 When I first started playing around with it, the lock nut was loosened and I found that it stays in tune well even without it locked. More good news for me. If I don't want to learn to set up this trem, unlike some others, it doesn't seem like I have to!

This is one of my favorite part about ZZ's in general: the necks. Actually, I've found 80's Aria shredder necks to be pretty consistent. They have some chunk to them. They're not your super thin, flat, fast necks. But they're a bit less rounded than a strat neck. There are a few dings and dents in the neck but nothing that gets in the way. I'm unmotivated to measure, but if I had to guess the fretboard radius I believe it's over 12", less than 14". I couldn't find this information by searching. The frets are in decent shape and the fretboard is held on well - no gaps or ridges developing between the woods.

The one downside in terms of playability is the body shape toward the 21st and 22nd fret. The cut does get right in your hand. A little bit of cutaway on the back of the V, away from the neck pocket, would have made this more pleasant in the design. But less structurally durable. 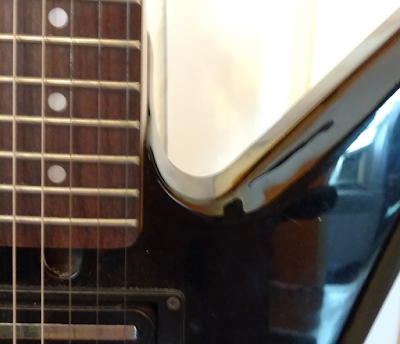 I'm happy with this guitar and I see myself playing it often. The only Explorer style guitars I've owned at the time of writing are all Aria Pro II ZZ's. It's nice to have a fun guitar shape with a 25½" scale, an amazing feeling neck and a unique sounding set of pickups. Peoples' opinions are all over the map on whether these old Arias are worth it. Even with a giant bite taken out of it during shipping, I find it hard to make an argument against this one for the price.
at July 15, 2017