Earlier I mentioned a project that involves dying a lower grade mahogany blue to get something close to the effect seem on a transparent blue Aria Pro II SG clone. This is part one of that project. Nothing has gone as planned.

This is the second budget set neck kit I'm building. It's again a short open mortise and tenon joint, I think. I took it right out of the box, put way too much Original Titebond on it and put the clamps on. So I forgot to take any pictures before I started. 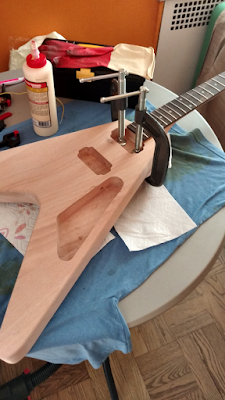 One nice thing about this kit is that none of the holes are drilled for the bridge. I could do tune-o-matic and tailpiece. Wrap around tune-o-matic. String through body tune-o-matic. Since I don't have a router, I could drill and chisel out a tremolo cavity if I really wanted to! I probably won't. But the nice thing is that I didn't really need to worry too much about getting the neck position exactly right. Unless I wanted to add a traditional flying V pick guard. Whoops!

Best practice is to let this sit 24 hours. I actually uncamped it after about 12 because I had thought I messed it up when I checked on it in the morning. Then I put the clamps back on for another 36. I was too busy for the next couple days to get to it.

One thing I noticed right away is that the body is three pieces. The glue joints aren't great. There's a bit of a gap around one of them. And the color of the wood around the joints isn't well matched. I've circled some of the imperfection below. 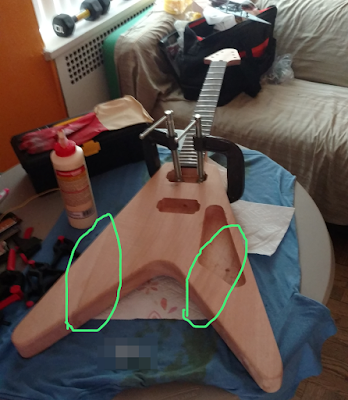 This mahogany was meant to be painted. But I'm not going to paint it. That wouldn't be fun. Even if the wood has visible imperfections, a finish that shows what the guitar is made of is interesting. I have enough painted instruments.

Since I planned to use Keda Dyes it was time to do - as the instructions tell you - the most important thing: prep the wood. Basically sand it with 120/150 grit consistently. I got out the sanding block and went to work with 120. However, as I was working I started noticing more and more imperfections that were both annoying and fixable. For example some glue spots around the body joints. So I got out this little guy with 90 grit paper for the first time. 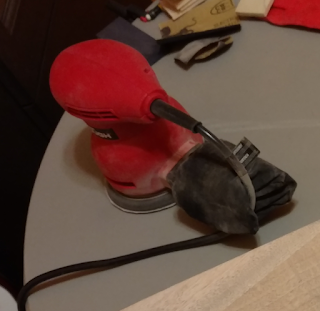 I picked this up from walmart.com on the cheap. It's great that it has a dust bag. Unfortunately, absolutely none of the dust went into the bag. I'm not sure why it's there at all. Instead, the dust frosted everything in my office. Lesson learned. Next time I use it, I'm going to at least cover some of the electronics. 90 grit left it rough and exposed the porous grain of the wood. It was also abrasive enough to allow me to eyeball changing the neck profile a bit. I sanded it a little flatter. Not super thin. But not as vintage round as the kit came. I'm really happy with the neck reshaping. I have zero confidence I could do it again. Just going at something you're holding with one hand with a power sander and a shop vac tube in the other to change its shape significantly sounds like it could end, at worst, with lots of skin loss. I lucked out. Whew.

The goal was to darken the grain. Leave the field of the wood lighter. Have the blue take strongly to the field. And have the grain show through with a high level of contrast. Even the parts of it that make it obvious it's three unmatched pieces of wood glued together.

Admittedly I have no idea what I'm doing. But my thought was to die the whole thing dark grey (near black if oiled), then sand it back off hoping that the die would take more deeply to the grain than the field. Then I'll apply the blue on top. I have other posts describing the mix for the blue and grey. But here are both together. 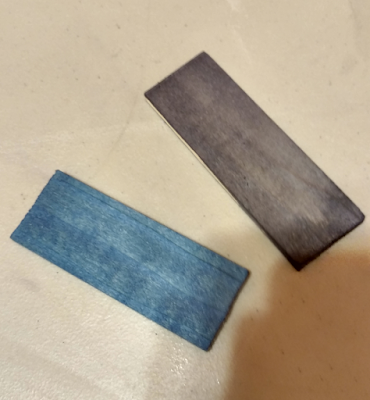 As expected these unmatched pieces are all over the place. The middle piece has some nice flame figure on it. The left wing took the dye much darker than the right. The joint lines show through super clear. Not a great cut of wood for a solid color. But like I said above, I'm not going to worry about it too much. 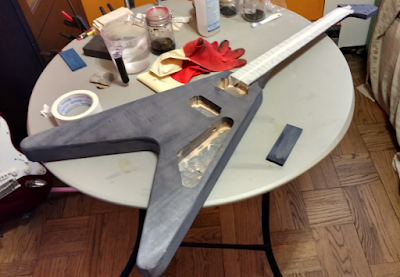 The fun really started when sanding off enough of the dyed wood to leave some of the grey dye in the grain and pores. But expose enough of the raw wood so that there's space to take on the blue. This is my first time trying this method on mahogany. What I didn't expect was how uniform the wood was going to be. And as a result, how much sanding I would need to do. to get the grey off in away that didn't end looking sloppy. So I started with 120 grit and a block. 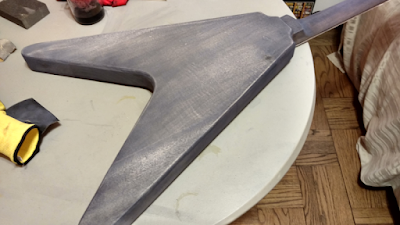 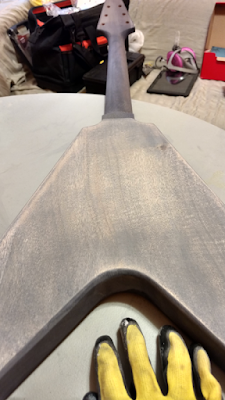 It's summer. And I don't have air conditioning in my office, where I do this work. I was prepared. Jorts and all. But it by this point I was dripping with sweat. I had only sanded the back side. And I was getting desperate. So I got out a super course (I forgot the grit) sanding sponge that I this is meant for drywall, not wood. 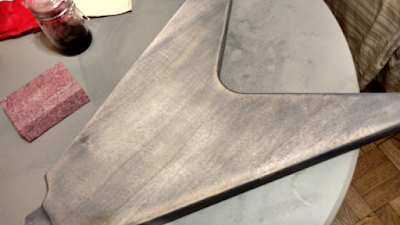 That sped things up a bit. For a little while. Until most of the large sand particles had de-sponged. You can see the problem here. 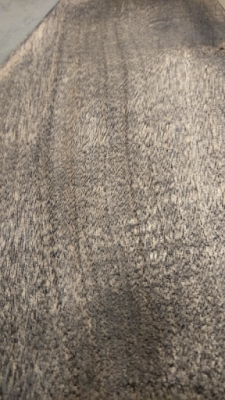 Mahagony is a porous wood. So it takes on dye deeply. But the grain is also very subtle. There isn't much figuring. So I kept sweating as I tried to wear down more of what I had dyed. Only to see something that looked a lot like the original wood. This was about two hours in. 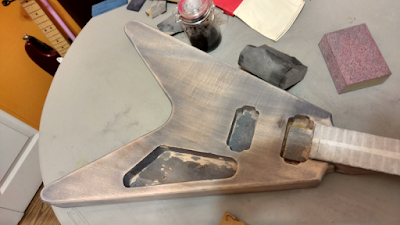 And I looked like I had gone jogging. It was time for something desperate. Although I wasn't very excited about putting yet another thin layer of dust over everything in the room, I grabbed the shop vac nozzle with one hand, the power sander with the other, put gloves on and a mask on and went at it again. 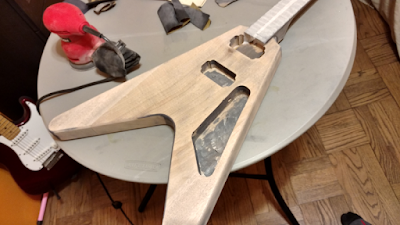 If you're wondering from this picture if I had dust all over the Strat on the left of the photo: yes. It needed a good cleaning afterward. Lesson learned - next time I'll move the other guitars out of the room. Finally, I had a decent amount of the grey worked out. 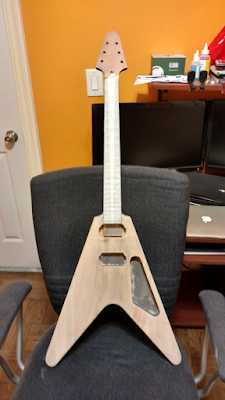 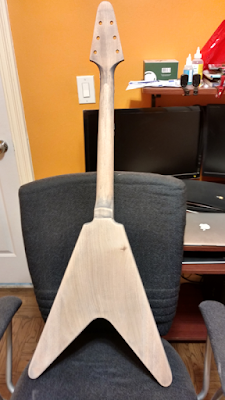 If only I had just been using the power tools from the beginning!

This part of the process was less work. But no less dramatic. The Keda dye flow chart mentions warm water a lot. I mixed my blue dye earlier in the day so at this point, I decided it was time to warm it up. I do this by boiling some water, taking a little plastic dish, pouring the boiling water into that dish, then setting a small picking jar full of the mixed die in the hot water. In a couple of minutes, it's bath water hot. Here's an action shot of the dye going on. 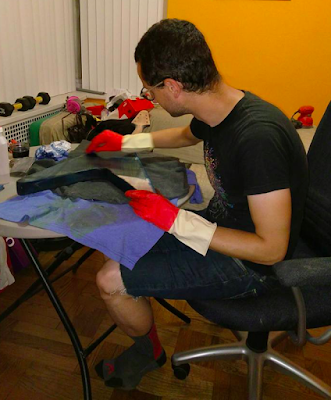 And the next day: the glue joints are of course both still very visible. 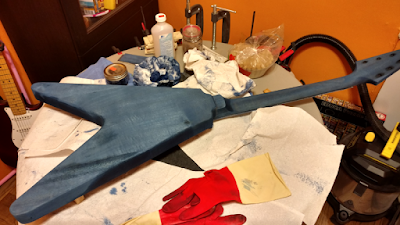 On the back, you can see a much darker stripe of blue on the right side. That dark ring goes right through the wood can be seen on the left of the front as well. 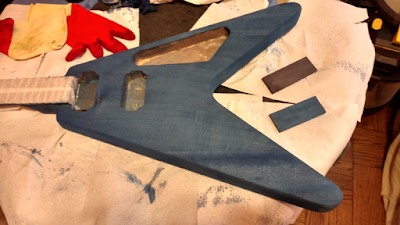 My "bring out the grain" strategy sort of backfired on me. I found it. It just wasn't what I was hoping for. 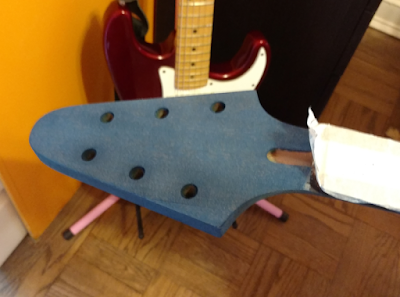 The headstock photo here shows the pores pretty clearly. The red-brown wood can still be seen through the dye. It is not what I planned. It is a bit odd. But I'm still excited. At a minimum, this is going to look interesting when finished.

The next steps are to sand lightly with higher grits. The goal is to not remove any dye. But to smooth out some of the very rough areas left by the 90 grit power sanding. From there I'll be applying Birchwood Casey grain filler. And then onto an uncountable number of coats of Tru-Oil. A mistake. Or two. Lots of sanding. And then another few thousand coats of Tru-Oil.

But before all of that, I've learned my lessons finishing before I've drilled for all the hardware. I made that mistake before. I decided given how dark it is turning out, it's going to look good with gold hardware. The kit came with chrome. To make sure there are no mistakes, I'm going to put everything else on hold until I get the parts. Which are on 1-2 month eBay shipping. It's a cheap kit. I'm going for value parts. Not top shelf quality on the hardware. Though I was lucky to get a set of lower end Grovers (like the ones on some Epiphone LPs) for $12. Hopefully. If they ever arrive.
at July 18, 2017