Every project that takes longer than a day has that point where everything has gone wrong. And you're prepared to just try to shove the whole thing into your trash chute. I just didn't expect it to come so early on this guitar. Last time I described the kickoff of this project. Based on lessons I previously learned with a set neck, glue first then start finishing everything seemed like the way to go. Of course, there are always more lessons to learn.

I have very limited time to devote to my guitar building hobby. So it's vital to have a plan to eventually see results. After getting the blue that I wanted, my plan was:
This was almost a good plan. Let's see how it turned out.

Everything arrived within a couple weeks. Most of the hardware was shipped from China. The pickups were shipped from within the U.S.

The bridge price was as low as I could find. 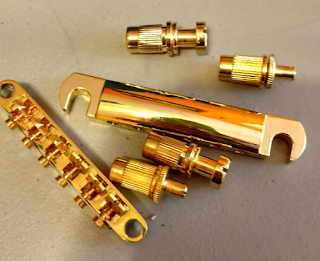 This is marketed as an ABR-1 bridge. That's incorrect. It is a Nashville style tune-o-matic with large posts and bushings. This article on the Stewmac site does a good job of explaining the difference. It also provides plenty of tips which I wish I would have read before I went to install this thing. But more on that later!

The tuners are great. They seem well constructed. I've bought a range of tuners on the lower end of the price spectrum and I figured I was getting a good deal on the lowest end of Grovers on eBay. However actually seeing them, I think these are "fake" or possibly "sold out the factory backdoor" Grovers. 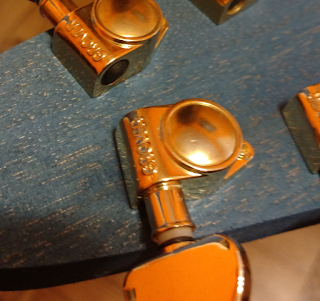 I went back to recheck the listing. I had noticed the logo engraved when I made the purchased. Looking closer, it looks like the lister purposely blurred the logo. But rather badly. And it doesn't claim anywhere outside of the pictures they're branded at all. If I hold them next to a set that came on an Epiphone Les Paul I own, I can tell the engraving of the logo isn't quite the same. Doesn't look too legit. Anyway, I won't be selling this. Especially after how the bridge install went. And if I ever wanted to I can swap them out to avoid selling some bad merchandise. Fakes or not, the quality seems worth the price. They're well constructed.

I've purchased several pickup sets from Dragonfire guitars. This is the first set of X2N's I'll be trying out. 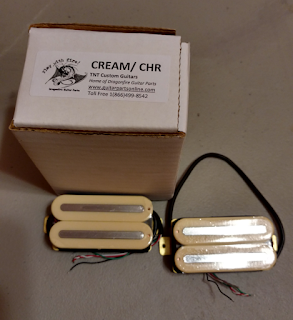 The choice here was partially due to my recent acquisition of an Aria ZZ Bladerunner with very similar, though much older pickups in it. I'm excited to see how they stack up! From everything I've read online, Dragonfire's pickups are Artecs wound to their spec in bulk. Note the amusing warning about fake Artecs on the Artec website. Don't get me wrong. I've found these pickups to be great so far. But they're mostly copies of some of the high-end brand models like D Activators. And it is true. There are many other pickups on Amazon and eBay now that look like, you guessed it, copies of copies. Or it's a giant conspiracy and they're all the same thing. Even the brand names. And I'm getting ripped off? ¯\_(ツ)_/¯

Fail One: Dropping the Bit

It has been a few weeks since I dyed the guitar blue. I thought ahead though. I kept some extra dye. So when I dropped this monstrous pen fluting bit right onto the body and introduced a nice gauge, exposing the natural color of the mahogany again, I thought whew - glad I have that dye. 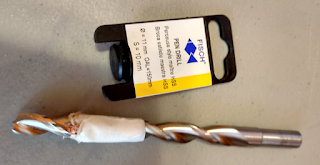 Now even before applying the dye, I had some worries. Was the dye too old? Did it need to be heated? Is shaking the bottle enough to mix it? It turned out the answers to these questions were yes, probably doesn't matter and no. But despite this, that surface scratch was begging me to do something to it. So I rushed, grabbed a bit of paper towel, shook the jar, dipped it and proceeded to rub a big gray splotch right into the body. 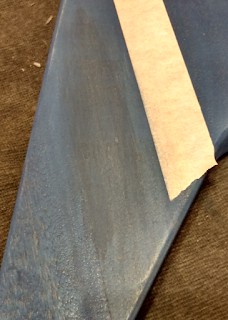 I even got out some 800 grit and thought I could "smooth it around" or something. That just made it worse. In hindsight just about nothing I was doing was logical. When you make a mistake the worst thing to do is rush to fix it. And I rushed to fix it. Within a few minutes, I knew I was in for re-sanding and re-dying either just the top or the whole guitar. So I decided to move on and finish the hardware fitting.

Looking back at my state of mind at the time, I'm pretty sure it was "well, it can't get much worse". I was ready to take some risk. I'll note up front that installing posts for a tune-o-matic bridge is new for me. I've never done it. I have pre-drilled blanks. I have a cheap SG someone else built from a kit. And I have two Les Pauls. All of these have your standard Nashville bridge with the large posts. Here's an example from an Epiphone Les Paul Studio. 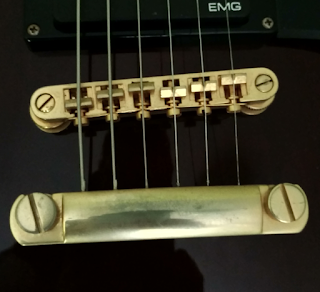 Note the slight angle of the bridge install. This is necessary on the low strings in order to keep them in intonation range. Somewhere right after the thought of "will this thing fit in my $15 Black and Decker drill" and "did I charge it?" 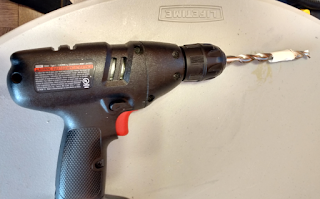 I decided I needed a beer. On the way to get that beer I thought "maybe I should make a paper template?". By the time I got back to my work room with my beer that thought had vanished. I taped along the fretboard lines to provide horizontal guides. I checked the scale length for the first time. A little off. Whew. I took the bridge and laid it on the body. Traced some lines to ensure the saddles would fall well in the middle of intonation range. I know what happens when you get this wrong. The SG I mentioned above got it wrong - partially why I got it so cheap. I eyeball compensated for heights and angles using some clamps to hold a soft tape measure against the fretboard running down from the edge of the nut position. I double checked everything. And then triple checked everything. Including the angle of the bridge. I have no regrets on how this part went.

Then came the actual drilling. Anyone sane uses drill presses for this stuff. But I don't know what I'm doing. And more importantly, I'm in an NYC apartment. I don't have a legit workshop. So I took the same drill I bought to install $3 curtains I bought at a dollar store many years ago, put the bit against the wood and gave it a try. 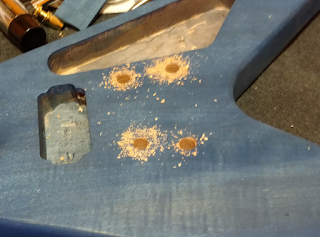 The good news somehow I got the post distances right. And measuring after the fact, the angle of the bridge is still in range. Whew. This wasn't by luck at all. It was surely the beer. The angle is more extreme but it's still going to work. 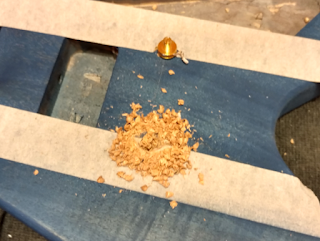 The tail piece. Well, that one is angled up toward the bridge on the low end. Now that shouldn't impact anything except tension. And of course, looks that make this thing unsellable in the future. 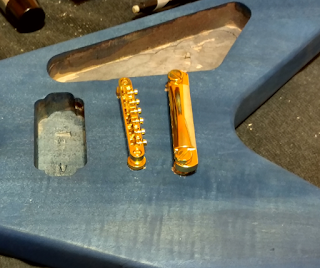 You might also observe that the tailpiece is just sitting there. No magic. I don't live in a spaceship. I give credit to the beer for ensuring the post spacing still made a fit possible. But it's tight. Tight enough that the tailpiece holds itself in place. Looking at the positive side I guess I won't need to glue the posts. Pressure pretty much keeps everything in place. 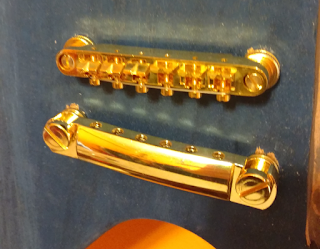 The bright side of this is that my drilling mishaps resulted in what I believe will be a playable instrument that's pretty close to well intonated! Maybe. The dark side is it looks like it was drilled by an idiot. Or beer.

At Least the Tuners Look Nice

These installed without a problem. The holes were pre-drilled though so I can't take much credit. I eyeballed lining them up parallel to the headstock edge. 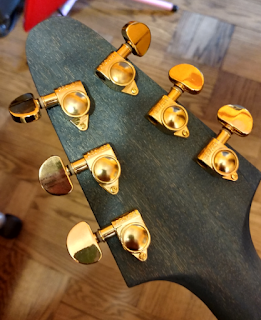 Every time I've used these dyes I've found that if I do an entire coat I get a reasonable result. If I sand it off and do an entire full second, third or fourth coat, nice. If I try to touch up spots I get splotches, lines, droplet marks in the end grain and just about any other non-desirable feature of a dyed piece of wood to come through. Do the whole thing in one sitting and mix new dye seems to get the best results.

Or more practically, cover the work surface. I was being careless because I hadn't applied oil yet. I forgot that the dye doesn't go that deep. And even if it did, the last thing you want is a big chip taken out of the wood.

The most obvious thing to do would have been to print a paper template, cut it into a cheap board, lay it on the guitar body, line it up, clamp it on and drill through it. Even without a press that seems like it would have been a pretty fool proof strategy. Next time. What I haven't figured out is if I attempt to do this on a carved top.

The new plan from here:
The additional step of adding a headstock veneer is just to calm a worry I've had about how porous this mahogany is. I know it's not high-grade wood. I want to play this thing. I like to use thick/thin gauge strings. So a few millimeters of hardwood glued onto the headstock will not only give it a distinctive look. But will hopefully add a bit of strength and tuning stability to a softer headstock. And besides, based on how this build is going so far, I need more challenges. Here's where I'm at.