I've been restoring what I believe is an '82 Aria ZZ Deluxe for some time. I say believe because I don't have the original neck plate. And a catalog that would verify if it is '82 or '83 is hard to find! So this guess is based on various other blogs and forums where I've come across something that looks like it was from the same year. I'll do a whole post on this guitar once it's working.


Problem: Pegs No Longer Fit in the Headstock!

However, I ran into a problem the other night while reinstalling the tuning pegs. This guitar was bought as a "pile of parts". So I'm lucky to have all 6 original tuners. When I went to put them in, many were hard to push through. And the two in the middle just wouldn't go. I actually slipped with a clamp and took a little nip out of the headstock trying to push the G in! 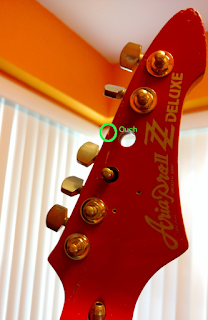 Certainly wood swells in the summer. And it's hot right now. But beyond that, this headstock has been broken once right down the tuning peg holes and re-glued. I also noticed a lot of gunk on the inside of the holes. So I was hesitant to grab the bit that matched the size of the tuner and just re-drill. Too much could go wrong here. 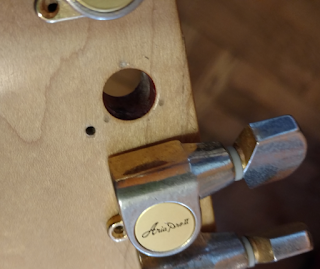 Solution: Use the Threading of a Smaller Drill Bit

I ended up taking a brand new smaller 6.4mm drill bit that was still oily from its original packaging. This is a higher quality Makita bit I got a good deal on during the last Prime Day. So there are no poorly machined jagged edges or anything along the threading. 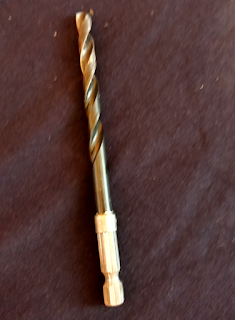 I put the bit through and up against the side of the channel. Started the drill at relatively low speed and then just rotated it around the hole. A bit of build up was knocked out. But I wasn't getting through the finish or the wood. Plus there was some exchange of sticky oil between the bit and the channel. 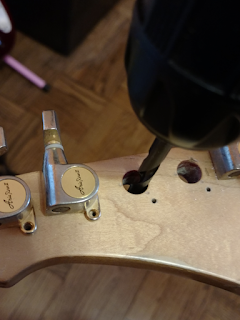 The result after a few seconds: the tuners slide in firmly but without any further major abuse to the guitar! 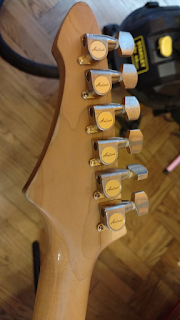 Next time you're contemplating redrilling on a finished neck because parts are mysteriously no longer fitting into place, it might be worth giving this a try first.
at August 19, 2017