This is the first kit guitar I put together. 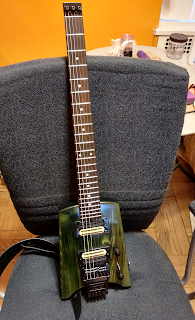 I started this project January 2017 and it has been playable for some time now. I've referenced it in a few other recent posts. I believe it is also an ammoon brand kit but I can't 100% remember what the box said. It was definitely on sale on eBay after the 2016 holidays. I think it was around $80. Somewhere I do have some pics of the build in progress. I'll eventually post those along with tips I can recall for others who want to attempt one of these. They're still for sale here and there though I have been seeing ~$125 as the going rate.

The body is multiple pieces of basswood. It is somewhat "assembled from scraps". The neck is two pieces of maple with a rosewood fretboard on top. Because this is a set neck, the tenon is a separate piece of wood that extends lower into the body of the guitar.

The body is died with various coats of yellow and blue aniline dyes (Keda) mixed with both water and isopropyl alcohol. The general technique I used is "wipe it on, sand it, repeat until something looks appealing to me". I forgot exactly how many cycles I went through. I did not dye the neck. If I did it again, given it is a set neck, I would have gone to make them a matching pair. But at the the time, I just didn't think of it.

I used Birchwood Casey Sealer Filler on both the neck and the body. And then applied many goats of Birchwood Casey Tru-Oil to both. Finally the whole thing, except the fretboard, is shined up with Meguiar's banana scented Mirror Glaze using some dremel buffing pads. 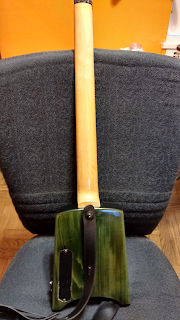 I'm happy the way it turned out. Basswood isn't beautiful right out of the box. I also understand not everyone would call this beautiful. But it is more interesting than a solid paint job to me. One downside though: basswood dents easily. And Tru-Oil is a thin, soft protector. Even over the course of around a year, it has already taken a few dents. On the flip side, it doesn't chip and finish level scratches can be pretty easily repaired with a little sanding, dye, oil and buffing.

These are not the pickups that came with the kit. The pickups that came with the kit were some generic black plastic covered humbuckers that did not actually fit in the pickup routes. I have them somewhere and will eBay them with a lot of other kit pickups at some point. I don't know if they're any good. But beware if you buy one of these kits: they don't fit the route! 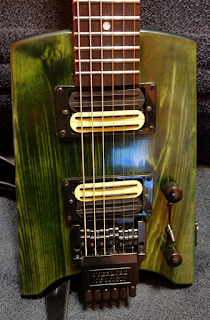 Instead these are Dragonfire Quad Rails. I don't have a working recording setup otherwise I would love to be able to post a clip of what they sound like. These are as over-wound as you get. That comes with a lot of string noise. Definitely pickups that benefit from one of those hairbands around your strings if you're not a perfect muter and you don't want a someone closing a car door across the street coming through your AMP. They're interesting. I don't mind having a pair. I wouldn't have two pairs.

I'll also note: even these pickups were a squeeze. I sanded away some of the bottom of the fretboard with a dremel tool in order to get the pickup to fit while still having the neck glued at about the right spot. It works. You can't even see it. But I know it happened.

Another minor upgrade: the tone pot is push/pull. If you check the image above, you'll see how small and narrow the electronics cavity is. One of the most challenging things in the end was getting everything to fit with the push/pull!

The neck feels like a modern strat neck. It isn't super thin. But it isn't a baseball bat. I applied the True-Oil both on the maple and on the edges of the rosewood up to the fretboard. The fretboard is left raw. It didn't really need additional sanding. Just some oil. I recall applying about a dozen coats of Tru-Oil, wet sanding between coats at the alter stages. It feels great. 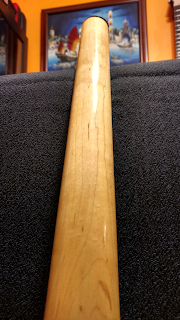 There are a few bad frets. They're not all bad. It could be worse. But to assume you won't need to level frets on a kit like this is a little crazy.

Oh jeez. If you can see it there, one side is not even attached down to the body and appears to bend up. And what are those weird pieces of wood in the bridge cavity? 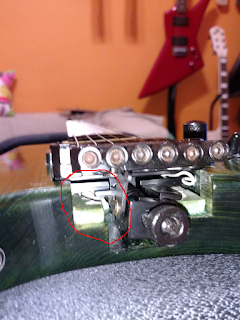 The bridge and the bridge route are a disaster. The route wasn't made long enough to actually remove and re-install the bridge after installing the base plate. The route doesn't actually fit the base plate's design. One of the screws just has nowhere to go. Finally, the bottom of the bridge touches wood before the wings of the base plate touches the shallow areas of the bridge route. So it doesn't sit on anything! So what you see there are a combination of poplar shims that have been carved down until the bridge sets even and bending that has occurred on the bridge itself under tension (in case you wondered, you don't need to be Superman to bend this bridge). This all sounds really bad. Remember the price tag. And don't expect to float the trem. There's some good news in that it has a built in locking trem block via the latch shown above.

Here's a picture of the areas I needed to chisel out of the body. As I have learned with the more recent kit I'm building where I tried to use a dremel to keep these rounded out, chiseling straight and square like this was definitely the way to go for those who live in a small apartment and can't really invoke a plunge router. It works. 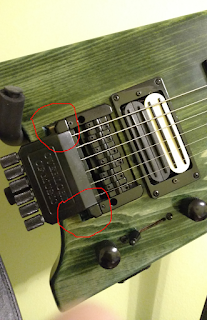 Problems with the bridge, especially on a set neck where the neck angle isn't going to be perfect to begin with, are by far the biggest downside of this kit. At the other end of the bridge, the lock note that holds the strings down over the zero fret didn't sit far enough back either and so I needed to dremel down some of the rosewood and maple near the...head?...in order to get it installed properly.

I'll also add I need to reset intonation. In making some other adjustments I managed to move the saddles. The saddles are held in by pressure. So you can imagine getting them place just right is...fun. I have it set up right now with Ernie Ball Skinny Top, Heavy Bottoms.

Overall: A Lot of Fun

This was fun enough to build, when I saw the Spirit GU clones on sale with pretty much the same hardware, but in bolt on form and with a more comfortable body shape, I couldn't help but pick one up. I got a baritone uke case for it because they're cheaper than a Steinberger case and much less awkward to bring to the airport. It is small enough to throw up as a carry on and packs more than enough tone with these over the top pickups. 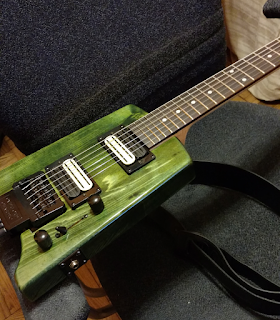